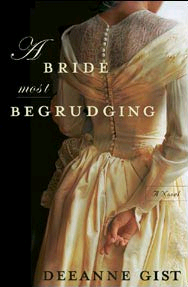 I actually talked a little about a Deeanne Gist’s novel A Bride Most Begrudging a long, long time ago, but the reason I wanted to use it for my first Romance and Reason post is pretty simply.  It’s one of my favorites.

I have a lot of contemporary authors that I love, but to tell you the truth, when it comes to books I list as my all time favorites, very few of them were published in this century.

To set the stage:
The year is 1643 and life in America is anything by civilized, especially when ships arrive from England with “tobacco brides” aboard.  Drew O’Connor isn’t looking for a wife he can buy with a barrel of the tobacco he grows, just a maid to take care of his house and help raise his sister.  But before long he finds himself in a marriage of convenience to one of the strangest and feistiest tobacco brides to make it to the New World.
Constance Morrow claims to be the daughter of an Earl, taken against her will and if she can’t be returned to her home, she would like to be left to attend her love of mathematical equations.
Life in the wild world of colonial America can change just about anybody, though, even the daughter of an Earl. And it might just take the daughter of an Earl to soften the heart of Drew O’Connor.

I love A Bride Most Begrudging for two specific reasons:
One: There is something deeper about it.
Let’s face it, any romance novel can basically be described as; Boy meets Girl…Boy and Girl have some serious problems…Boy and Girl overcome and live happily ever after. And even if that is the sum total of a story, if you’re looking for a romance, you’re still satisfied.  But A Bride Most Begrudging really does feel like more.  The blossoming, often humorous romance between Drew and Constance is great and you can’t help loving them both, but the spiritual struggles each has and the trials faced by the average person living during this time period give the story more depth than your average romance.

Two: The History
I am the first to admit that I am not the biggest fan of American history. Shameful, I know. And I probably wouldn’t have picked this up if my mother hadn’t decided to gift it to me. I discovered, however, an America I really didn’t know and it was fascinating.  The book is set after the establishment of colonial America, but more than a hundred year prior to the Revolutionary period.  It is a segment in history I don’t see much about and Deeanne Gist makes it very interesting.

I think I once described this as the sort of story that sticks to your ribs like soul food and I still would. Just like I still have to admit that as a Californian I know nothing about soul food, but comparing this book to tofu or In and Out Burger would have been wrong.

And I’m not quite sure how Deeanne Gist would feel knowing she’s made it to a place on my list of authors otherwise occupied by writers who have long since died, but that’s just where she’ll have to stay.

So, have you ever read a story set in this time period?

11 thoughts on “Romance and Reason: A Bride Most Begrudging”