Lol, so, what do I do when a major, bestselling author sort of inadvertently copies my book cover? 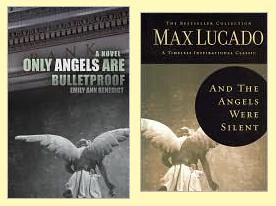 For a moment I was afraid that mine might be a copy, because his book was originally released in the late ’80s. Then we suddenly remembered that we have a copy of this book and it had a different cover. After I recovered from the surprise, I looked it up online and discovered that he just rereleased it, with a new cover, last month…three months after mine came out.
I’m sure this wasn’t done on purpose. He probably doesn’t even know I exist. And I know that image was part of a collection that a stock photo company sells. But still, who could have ever seen this coming?
I don’t really know if I’m going to mention it to anyone yet. Currently I’m somewhere between amused and stunned. Half of my family and friends are upset and the other half thinks it might be a good thing.
I’ve got one interesting scenario in mind. A week before I have my next book signing, the store is going to put up posters of my book cover at all of their entrances. Max Lucado’s book will probably be somewhere near the new release table…so, do you think anyone is going take a quick glance and think Max Lucado is coming into town for a book signing? LOL ;)

One thought on “Beyond Weird”